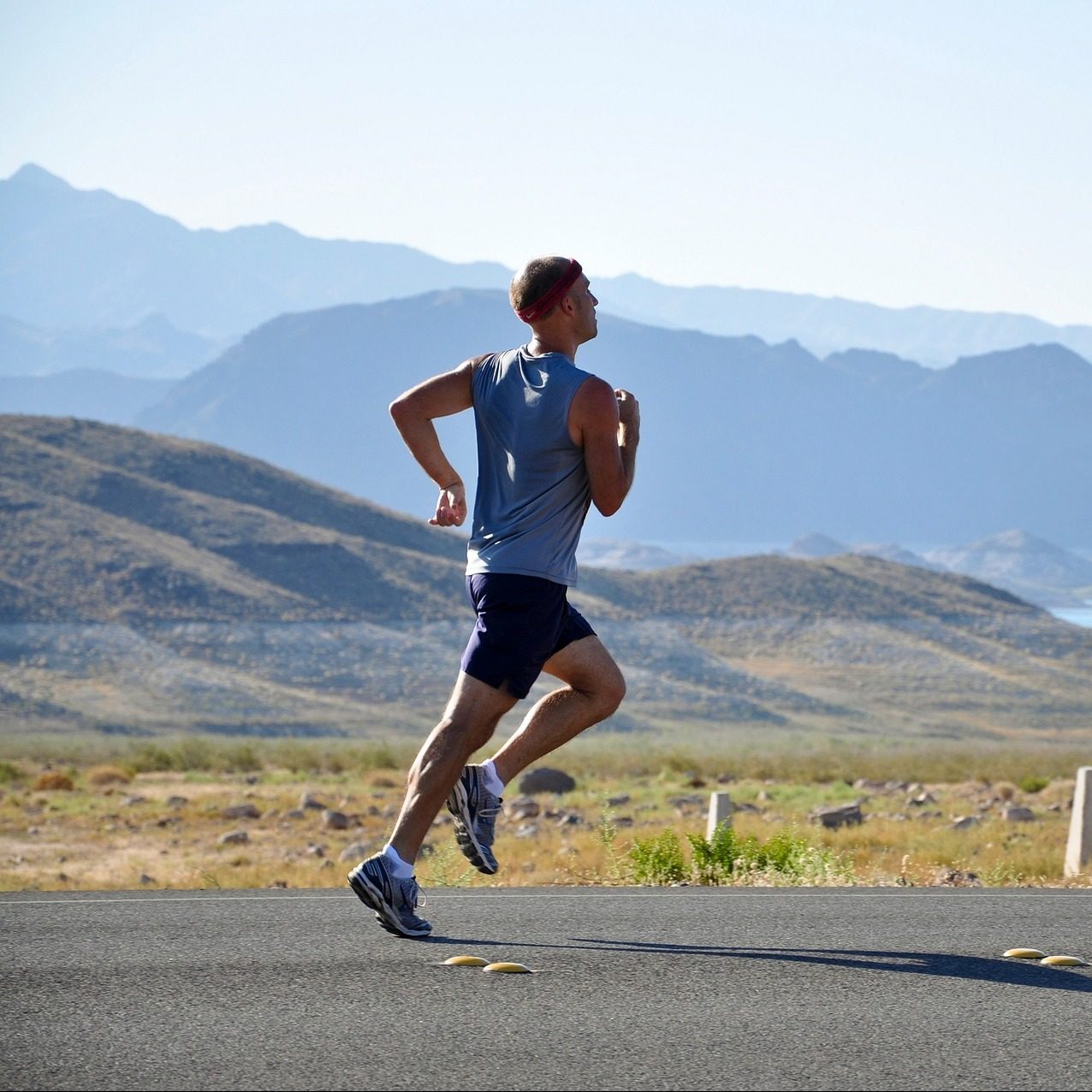 Iliotibial Band Syndrome (ITBS) is one of the most common overuse injuries among runners. It occurs when the iliotibial band, the ligament that runs down the outside of the thigh from the hip to the shin, is tight or inflamed. The IT band attaches to the knee and helps stabilize and move the joint. When the IT band isn’t working properly, movement of the knee (and, therefore, running) becomes painful. IT band pain can be severe enough to completely sideline a runner for weeks, or even longer.

Symptoms of ITBS syndrome consist of pain on the outside of the knee, more specifically at or around the lateral epicondyle of the femur or bony bit on the outside of the knee.
It comes on at a certain time into a run and gradually gets worse until often the runner has to stop. After a period of rest the pain may go only to return when running starts again. The pain is normally aggravated by running, particularly downhill.

Pain may be felt when bending and straightening the knee which may be made worse by pressing in at the side of the knee over the sore part. There might be tightness in the iliotibial band which runs down the outside of the thigh. Your Podiatrist may use Ober’s test to assess this. Weakness in hip abduction or moving the leg out sideways is another common sign. Tender trigger points in the gluteal muscles or buttocks area may also be present. 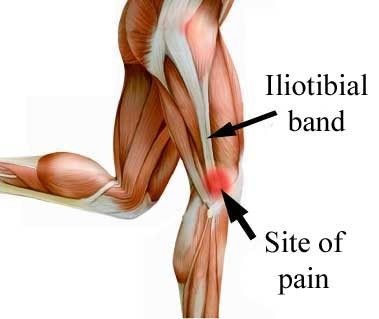 ITBS can result from any activity that causes the leg to turn inward repeatedly. This can include wearing worn-out shoes, running downhill or on banked surfaces, running too many track workouts in the same direction, or simply running too many miles. Unlike many overuse injuries, however, IT band pain afflicts seasoned runners almost as much as beginners. When the iliotibial band comes near the knee, it becomes narrow, and rubbing can occur between the band and the bone. This causes inflammation. Iliotibial Band Syndrome is more common in women, possibly because some women’s hips tilt in a way that causes their knees to turn in.

Treatment for ITB friction syndrome needs to combine a number of options. The main aim is to reduce pain and inflammation, then stretch and condition the muscles so the injury does not recur when returning to full fitness.

Rest
Rest is important to allow the inflamed tendon to heal. Continuing to run with ITB syndrome will most likely make it worse. Initially complete rest is a good idea but later activities other than running which do not make the pain worse such as swimming or cycling should be done to maintain fitness.

Cold Therapy
Apply cold therapy or ice to reduce pain and inflammation. Ice should be applied for 10 to 15 minutes every hour until initial pain has gone then later 2 or 3 times a day and / or after exercise is a good idea to ensure the pain does not return. Once the inflammation has gone then potential causes must be addressed such as a tight ITB or the pain will most likely return.

Medication
A doctor may prescribe anti-inflammatory medication such as NSAID’s e.g. Ibuprofen. This is useful in the early acute stage to reduce pain and inflammation. Long term it is not likely to be of benefit, particularly if it is just being used to mask in injury and not as part of the treatment. Always check with a doctor before taking medication in case you have contraindications which mean they could cause harm, for example asthmatics should not take Ibuprofen.

Sports massage
A professional therapist may perform sports massage to help relax and loosen the tissues and use myofascial release techniques which have been shown to be highly effective. Self-massage techniques using foam roller can also be very helpful in correcting excessive ITB tightness.

Extracorporeal Shockwave Therapy
Shockwave therapy has been demonstrated to be very effective treatment for symptoms of ITBS and helps reduce pain and inflammation.

Acupuncture – Dry Needling
Dry-needling techniques or acupuncture may be beneficial also. Acupuncture is performed by inserting needles of various lengths and diameters into specific points over the body and in this case around the knee joint. The needle is usually inserted, rotated and then either removed immediately or left in place for several minutes. It is thought to be beneficial in reduce chronic or long term pain. 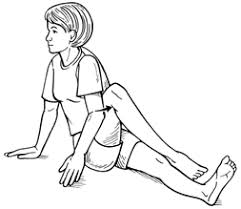 Foam roller exercises
Using a foam roller on the IT band and gluteal muscles can help stretch the iliotibial band and remove any tight knots or lumps in the tendon. therefore friction on the side of the knee. 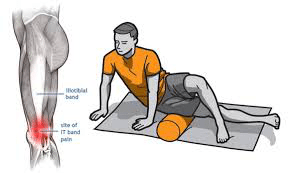 Strengthening exercises
Improving the strength of the muscles on the outside of the hip which abduct the leg will help prevent the knee turning inwards when running or walking and therefore help reduce the friction on the ITB tendon at the knee. In particular strengthening exercises for the tensor fascia latae muscle and gluteus medius such as heel drops, clam exercise and hip abduction are important.

Training modification
Errors in training should be identified and corrected. These can include over training or increasing running mileage too quickly. As a general rule a runner should not increase mileage by more than 10% per week. Running across a slope or camber in the road for long periods or poor foot biomechanics should be considered. When training starts again avoid too much downhill running.

A rehabilitation strategy which includes stretches and exercises to strengthen the hip abductors is important. In acute or prolonged cases cortisone and prolotherapy injections into the site of irritation may provide pain relief.

At the Foot and Ankle Clinic our highly qualified team of Podiatrists are all members of the Australian Podiatry Association and offer a combined 50 years’ experience. They are trained to diagnose and effectively treat iliotibial band syndrome via a range of treatments.